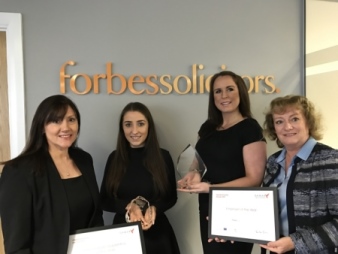 Forbes Solicitors has been awarded 'Employer of the Year' whilst Frankie Haggerty was awarded 'Intermediate Apprentice of the Year' in the Annual Apprenticeship Awards 2017.

The Damar Annual Apprenticeship Awards celebrate the achievements of Damar's apprentices, employers and apprentice supervisors. Damar is one of the country's leading providers of apprenticeships and, over the past year, has worked with over 1,700 apprentices at more than 350 employers nationwide.

Forbes Solicitors has been delivering the Business Administration Level II Apprenticeship in house for the last 16 years and several of Forbes' employees started their careers as Apprentices with the firm, including Lisa Hale, the Trainer who now delivers the Apprenticeship Programme. Since 2000 Forbes has supported 200 Apprentices through their Apprenticeship qualifications.

Frankie Haggerty, who started her career as an Apprentice with Forbes is now a paralegal in the Forbes Collect department. She is also a Lancashire Young Apprentice Ambassador and recently attended a lunch at the House of Commons, hosted by Minister of State for Apprenticeships and Skills, The Rt Hon Robert Halfon MP.

Joanne Pickering, Director of HR, Training & Quality, commented, "We are absolutely thrilled to have been awarded Employer of the Year and see Frankie named as Intermediate Apprentice of the Year. To be awarded not just one, but two awards, is tribute to the hard work the Forbes' team put into the Apprentice Programme and I am delighted that it has been recognised by Damar. It's truly a privilege to see our Apprentices start their careers and then progress using the invaluable skills gained through the Programme."

Frankie Haggerty commented on her win, "Completing my Apprenticeship with Forbes has given me skills and confidence to build myself a career rather than simply 'having a job'. I would encourage any young person to take up the opportunity of an Apprenticeship."