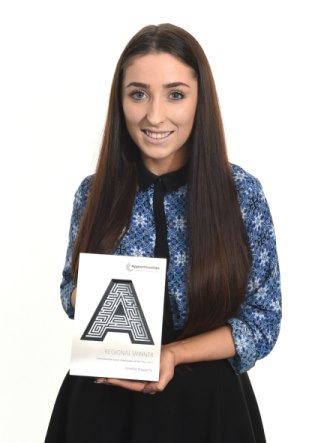 Frankie Haggerty, who started her career as an Apprentice with Forbes was named as Intermediate Apprentice of the Year for the North West, Cumbria and Lancashire area at the National Apprenticeship Awards.

The National Apprenticeship Awards, now in their 14th year, showcase the successes and benefits of apprenticeships across England in the last year. Winners were announced at an awards ceremony held at the Titanic Hotel, Liverpool. National award winners will be announced at a ceremony to be held in London in January.

Frankie comments, "It's an honour to be named Intermediate Apprentice of the Year. Completing my apprenticeship with Forbes Solicitors has given me skills and confidence to build myself a career rather than 'just having a job'. I would encourage any young person to take up the opportunity of an apprenticeship."