Fundraising volunteers from Forbes Solicitors have collected £3,500 for charity after creating their own version of the Tour de France cycling event.

The event, which raised money for Derian House children's hospice in Astley Village, Chorley, involved a team of around 30 volunteers making the 100-mile cycle from the firm's Leeds office to its base in Accrington.

The journey took in all Forbes' other offices in Manchester, Salford, Chorley, Walton Summit, Preston and Blackburn.

The Tour de Forbes event was organised through the legal firm's newly-launched Forbes Foundation which provides financial support to children, and their families, who are in need, by reason of ill health, disability, and/or financial hardship by providing facilities, equipment and monetary grants.

Forbes works to support charities located close to its offices and the fundraising event was arranged by Partner Jonathan Holden to purchase shower chairs for the hospice. 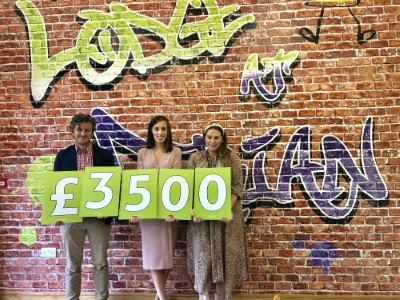 Jonathan, who is Forbes' Head of Employment, said: "This is the second year we have completed the Tour De Forbes and I would like to thank all those involved. It was real team effort, from the cyclists to the support crew and all those who cheered us on and helped with sponsorship.

Abigail Williamson, Corporate Sponsorship Manager at Derian House said: "We're really grateful for the amazing total that the 30 intrepid fundraisers from Forbes Solicitors managed to raise with their Tour de Forbes event - it just shows that a little creativity and a lot of hard work can go a long way!

"The new shower chairs will make a positive difference to the children and young people we look after at Derian House."

Derian House helps children and young people whose lives are too short to make happy memories in an environment of fun, respect and high quality care.

It provides respite and end-of-life care to more than 400 children and young people across the North West, 24 hours a day, seven days a week and never closes to those who need it.

For more information on Derian House go to www.derianhouse.co.uk.

The Forbes Foundation is funded by staff joining forces to organise and take part in fundraising events, both internally and with support from family, friends, clients and professional contacts across the county.

For more information on the Forbes Foundation and how to help with fundraising go to www.forbesfoundation.org.uk.