The Claimant alleged he had suffered a Work Related Upper Limb Disorder (WRULD) in the form of Dupuytren's Contracture (flexion deformity) of his left little finger and Carpel Tunnel Syndrome. The Claimant's medical expert provided a causative link between both conditions and his alleged occupational exposure to use of vibratory tools/machinery.

The Claimant had historically worked for the Defendant 12 years prior to the issue of court proceedings as a utility operative working on gas connections.

The Claimant was subject to TUPE and two Defendants were named. His allegations related to overall negligent exposure to vibratory tools for a period of 6 years.

The Claimant had initially worked for the client defendant for approximately 18 months prior to his subsequent TUPE transfer.

As is often the case in these historical occupational disease claims, the Claimant's allegations as to his alleged exposure to harmful and negligent vibratory use of tools on a daily basis were unspecific, vague and inconsistent with the usual working hours which would have been in operation including travel time to the various work sites to undertake the work.

The medical report of the Hand Surgeon attributed the injury to alleged occupational exposure without sight of any engineering evidence.

The liability issues usually boil down to the levels of vibration the Claimant was exposed to. If the daily dose of exposure exceeded 2.5m/s² then the Defendants should have implemented measures avoiding or reducing vibration exposure to the Claimant.

It is also usually to ask employers to provide details of:

A drawback of historical occupational disease claims, is that most, if not all of the liability issues are often difficult to address in the absence of key personnel or documentation especially when projects complete or personnel are subject to TUPE and all documentation moves with the employee.

Dupuytren's contracture can be both caused naturally and reported occupationally. Whether it is occupational or not, depends on epidemiological evidence that work in the prescribed job with the prescribed exposure, increases the risk of developing the disease by a factor of two or more.

The present position from studies relied upon by the Industrial Injuries Advisory Council (IIAC) indicate that there is a more than doubling of risk of developing Dupuytren's where an individual is exposed to certain levels of vibration and it on this basis that the IIAC concluded that the case was made for prescription for Industrial Injuries Disablement Benefit. However, they also considered that the qualifying exposure was a duration of exposure of at least 10 years in aggregate. 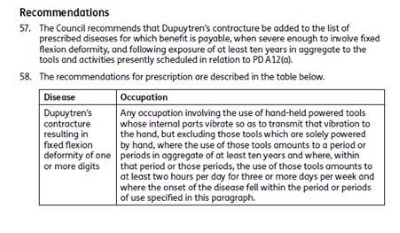 The IIAC report raises a presumption provided that the onset is developed while in or within one month of leaving a job that meets the above specification.

Similar principles apply to Carpal Tunnel Syndrome (CTS). There are various factors which may be applicable and not necessarily occupational. The IIAC 2006 Command Paper, Work Related Upper Limb Disorder, recommended that CTS should be a prescribed disease but only in the circumstances where:

50. After considering the evidence, the Council recommends prescription for CTS in those whose occupation involves repeated palmar flexion and dorsiflexion of the wrist (see Appendix 2 for a diagram of the relevant action) for at least 20 hours per week and who have undertaken such work for at least 12 months in aggregate in the 24 months prior to the onset of symptoms.

The IIAC presumption of this being a disease caused by vibratory tools applies when the work has been undertaken in the 2 years prior to onset of symptoms and presentation to medical attention normally occurs during or within 6 months of leaving the relevant employment.

51. A cycle time of once or more often in every 30 seconds can be considered sufficiently 'frequent' to qualify for prescription. The Council anticipates that presentation of medical attention would normally occur during, or within six months of leaving the relevant exposed employment.

The Claimant failed to meet the specified criteria for either medical condition.

The Claimant first alleged recognition of symptoms in November 2015 when he was no longer using vibratory tools and was undertaking driving duties and had been doing so for 20 months.

It is vital that there is always close scrutiny of the Claimant's medical records and working history to identify other possible medical causes or to be able to challenge the claim on limitation.

Application for Summary Judgment and/or seek Defendants Own Medical Evidence

Applications were made jointly by the Defendants to strike the claim out as it was clear on the disclosed evidence that the Claimant had no real prospect of succeeding on the claim and there was no compelling reason why the case should be disposed of at a trial.

The application in relation to the Defendants seeking their own medical evidence set out in detail the Claimant's medical expert's failure to address the IIAC guidelines when providing his opinion on alleged causal link.

In anticipation of the strength of the applications made and the difficult hurdles on evidence that the Claimant had to overcome, a Notice of Discontinuance was served on both Defendants.

Even in historical occupational disease claims, where you may not have documentary or live "evidence" of the Claimant working conditions, the case demonstrates the importance of ensuring that all aspects of the claim are challenged even when the odds may at first blush may not be in your favour in contesting the allegations.

For more information contact Siobhan Hardy in our Insurance department via email or phone on 0113 386 2686. Alternatively send any question through to Forbes Solicitors via our online Contact Form.

Big Brother Is Watching Who? - Assessing the Impact and Risk of…

The Fatal Accidents Bereavement Award Has Been Increased.