Failing to adhere to health and safety standards can be a very costly mistake to make, as the owners of the Britannia Hotel in Southport recently found out.

The hotel chain was fined £80,000 after a guest sustained life-changing injuries when she fell through rusty iron railings to a lightwell below.

Deborah Henshall was staying at the Prince of Wales Hotel in Southport when the incident happened. The railings that were intended to prevent people from falling down the six feet drop to the basement were missing in one location and badly corroded in numerous other areas.

The railings were where the car parking was located, and it was when Deborah went to the rear of her parked car to get her coat from the boot that she fell.

She sustained two spinal fractures, a broken left big toe and blood on her lungs due to sternum and rib fractures. She had also sustained a head injury, concussion, and trauma. 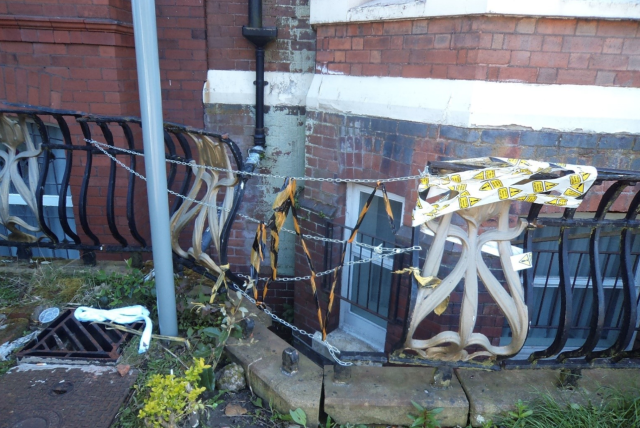 The picture (above) - used by Sefton Council in its prosecution against the hotel's owner was taken days after the accident. It shows a huge gap in the railings linked by a thin piece of chain and some loose hazard tape.

The council issued an improvement notice after the company failed to make the area safe with suitable fencing more than three weeks after the incident.

Britannia Hotels could not demonstrate that a system was in place to check and maintain the iron railing regularly. Its risk assessments failed to address the hazard of a fall from height and did not refer to the iron railings, Sefton Council's senior lawyer Fiona Townsend told Sefton Magistrates' Court earlier this month.

'The company fell short of the appropriate safety [requirements] and the systems it had in place were not sufficiently adhered to or implemented. It had failed to make appropriate changes following a prior incident and had allowed breaches to continue over a long period,' she added.

'This led to the incident, which has had a substantial and long-term effect on Ms Henshall's ability to carry out normal day-to-day activities or [her] ability to return to work.'

In her victim statement, Deborah said she was distressed over how her life has changed since the accident, before which she was working two jobs. She said that she had been off work since the accident, had lost both jobs and is currently on Universal Credit and personal independent payments.

'I am still suffering every day with severe pain,' she wrote. 'I used to be very outgoing and very social within my group of friends and family. This accident has caused me so much pain and distress that I feel will never be back to the person I was before.'

Sefton Council prosecuted Britannia Hotels under sections 2 and 3 of the Health and Safety at Work Act for failing to protect the safety of employees and those not in its employment. It was fined £80,000 and ordered to pay £6821 in prosecution costs.

Passing sentence, District Judge Wendy Lloyd said: 'I take both Britannia's previously good character and guilty plea into account, but others were exposed to the risk of falling into the lightwell; a number of people were potentially at risk.

'I extend great sympathy to Ms Henshall. This amount is in no way a representation of what I think her injury is worth. This is a fine on health and safety failings.'

Ms Henshall is likely to be bringing a claim for compensation as a result of this accident, so as well as the large fine there will be a substantial damages award too, in all likelihood. The civil claim for compensation will be brought under section 2 of the Occupiers Liability Act 1957 (the OLA) which provides that occupiers of premises must ensure that their visitors are reasonably safe in using the premises for the purpose that they are there. It does not automatically follow that a successful prosecution will lead to a successful civil claim but it is a relevant factor that the court will take into account.

We examined another hotel accident claim, in which there had also been a prosecution under the Health and Safety at Work Act in an article that you can access from this link

Premises risk assessments have to be suitable and sufficient. In this case, the hotel was aware of the hazard but failed to carry out any adequate repair of the hazard, giving rise to the foreseeable risk of injury to visitors using the car park. Please see our recent article relating to a fatality on school premises where we considered the suitability of risk assessments that you can find here.

As a reminder financial fines and prosecution costs imposed by the Court in any regulatory proceedings will not be covered under an insurance policy on public policy grounds.

For more information contact Ridwaan Omar in our Insurance department via email or phone on 01254 222457. Alternatively send any question through to Forbes Solicitors via our online Contact Form.

Claimant's errors on issue lead to successful strike out