The judgment in this tripping claim showed the importance of accurate measurements when defending tripping on the highway claims.

The claimant brought a claim as a result of allegedly stumbling and falling due to a depression in block paving on a pavement. Such minor defects are often seen on our pavements and together with our client, Wigan Council, the decision was made to support the council's highways inspector in his risk assessment that the depression was not a danger that should give rise to liability on the defendant council. In fact, in her judgment, the judge described the locus as an "unremarkable location"

This claim arose out of an accident on 19 August 2019 which followed the introduction of the code of practice for highways that brought to the fore the risk-based approach to highways management and inspections. Using their training the highways inspectors make an on-site risk assessment of any defect that reaches Wigan Council's initial investigatory level, in order to decide what level of response, if any, should be made in relation to that defect.

In this case, it was the council's highways inspector's view that the alleged defect did not even reach the investigatory level, which is 25mm in a footway. At trial, it all came down to measurements and the methods used to obtain them.

The claimant's husband had attended the location post-accident and used a piece of wood, a school ruler and metal clips to measure the depth of the depression at its deepest point at 28mm as shown in the following photograph. 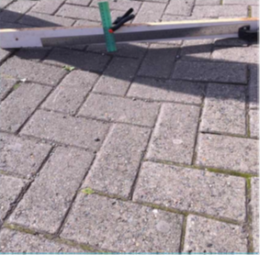 By contrast, the council's inspector, in his post-accident attendance at the locus, used spirit levels attached to his measuring device, as can be seen in the next photograph. He identified a defect of only 23 mm at the deepest point. 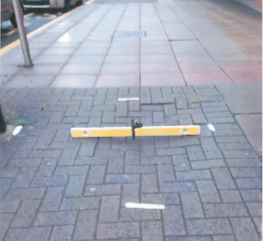 The judge was very clear that she preferred the council's method of measuring the locus. She accepted that the inspector was more experienced in measurements and said that the equipment used by him was better than that used by the claimant's husband. Further, she criticised the husband's photos for not showing where he placed the ends of the pieces of wood he had placed across the width of the defect, nor could it be said that the wood was level. The inspector by contract used a spirit level.

The accident location did not present a formal tripping edge, as is often the case in such claims. However, where measurements of an alleged defect are to be obtained and then used as evidence it is important to get it right, as the inspector did here. This applies equally to a large depression as here, as it does to a direct tripping edge. It is important that those giving evidence on behalf of local authorities can show that the equipment they used was appropriate and that the methods of measuring any defect are effective. In this case, the judge was being asked to prefer one person's measurements against another and the methodical way that the inspector had gone about taking his measurement was instrumental in a successful defence.

For more information contact Elizabeth Bower in our Insurance department via email or phone on 01254 222411. Alternatively send any question through to Forbes Solicitors via our online Contact Form.

Isolation Confusion: Which sectors may be exempt from self-…

Ofsted Rapid Review into safeguarding and the new inspection…