We acted for Gwynedd Council in a claim brought by Mrs Berry. She and her husband were on a day trip to Criccieth. They decided to walk towards a breakwater, which is a large concrete structure and can be accessed by a concrete path as shown in the following photograph. Its purpose is to protect the beach from erosion. 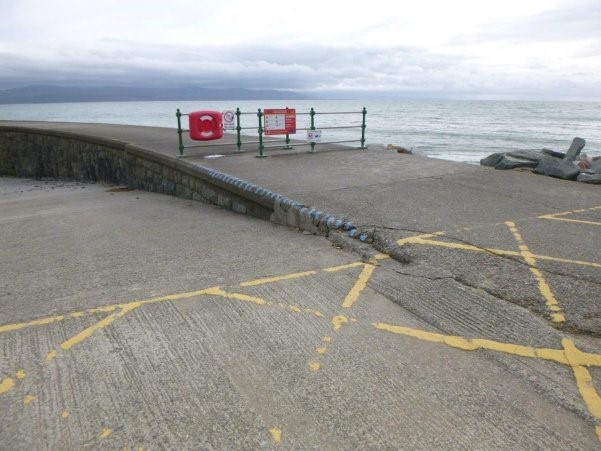 Mrs Berry, who was 72 at the time of her accident, had gone along the breakwater through the chicane railings pictured, but as she returned back the way she had come she fell about 2½ feet onto the ramp below. Apparently, she was distracted by the view. The railings were there to prevent vehicles from driving onto the breakwater.

It was alleged that the Council were in breach of their duty to Mrs Berry for failing to take steps to prevent the accident from happening or alerting her to the danger by marking the edge of the ramp (which the council did some time post-accident), putting up a warning sign or extra railings for example. The Council's defence was that this was an obvious defect and that there is no duty to protect for obvious risk following the long line of cases such as Staples v West Dorset District Council, Tomlinson v Congleton Borough Council, and Edwards v London Borough of Sutton.

Mrs Berry accepted she was an experienced walker, able to walk on different surfaces, and walked with care, that she had a clear view of the breakwater and was aware of the change of height. Her vision was unimpeded, and her view was unobstructed. There was no rush, and once positioned on the breakwater she was aware she was elevated and that there was an edge. She provided contradictory evidence about how she got onto the breakwater, but the judge accepted that the most plausible explanation was that she had stepped up onto it via the kerb shown in the photograph on her way towards the railings.

The judge found that due to the obviousness of the structure it was impossible for her not to have seen it. It was not necessary for the Council to have marked it. There was a suggestion on behalf of the claimant that the railings should have been extended or that the yellow hatching as shown in the bottom of the photograph would have alerted her to the danger. The judge accepted that the hatching was not a warning to pedestrians, but was to prevent parking and that it would not be feasible to extend the railings perpendicular to the sea, even if it was necessary, as they would be subject to constant damage by high tides and storm damage which could carry boulders across the breakwater.

There would have been minimal cost in providing some warning or barrier but the judge concluded that it was an obvious hazard so there was no duty to warn or protect and therefore the costs of any warnings is not relevant where no duty is owed. He further specifically stated that "there is no principle of law that a lesser degree of care can be taken by a tourist" and agreed with the Council that the placing of markings at the edge of the ramp with a yellow line were the actions of a conscientious Local Authority once there had been an accident, the first in over 40 years.

There are numerous similar structures around the UK and whilst each case will need to be investigated on its merits this decision should be helpful in relation to similar claims.

Whilst the Occupiers Liability Act 1957 places a duty on occupiers of premises to take reasonable care to see that visitors will be reasonably safe in using the premises, the judge started his judgment by pointing out that this is a qualified duty and is moderated twice by reasonableness. There is no duty to remove all risks. The law in relation to obvious dangers is clear and has been well established over several decades, that there is no duty to protect for obvious risks. Our detailed investigations and the statements we obtained from the Council's witnesses enabled us to persuade the judge that this location was an obvious danger such that no duty arose. Such cases will be fact specific, and photographs are very helpful. In addition, here we were able to supply video footage of the location that the judge found very helpful.

For more information contact Andrew Ellis in our Insurance department via email or phone on 0161 918 0001. Alternatively send any question through to Forbes Solicitors via our online Contact Form.

Forbes at Trial - Claimant "extremely fortunate not to have had a…